Doublestar Drilling (DSD) was awarded the Augustana Residential Tower in fall of 2017. This Anchored Soldier Pile and Lagging Shoring System was located in Edmonton, AB. At a total excavation depth of 19m, this became DSD’s deepest Lagging System to date.

Our piling crew were equipped with Doublestar’s Soilmec SR65 drill rig, to ensure the design depths for the Soldier Piles were met. In under 2 months, we completed the H-Beams for 68ea Soldier Piles to depths of 23m.

DSD’s Soilmec SM14 tieback drill installed ~176ea anchors, to lengths of 18m with a 36mm DSI threadbar. Prior to anchor installation, 2 pre-production test anchors were completed to test the anchor load. Based on these tests, the remaining anchors were to be stressed up to 133% of their Design Loads. By the 5th row of tiebacks, the loads were up to 900kN, which required using Doublestar’s 200ton Jack in order to meet the project’s standards.

Due to the size of the project’s footprint, this site quickly became a high volume area, making safety DSD’s top priority. Doublestar worked with Pagnotta on the pre-project planning to ensure no steps were missed and everyone was on the same page. Daily site safety meetings, organization and communication were the key essentials of making Augustana an overall success and an incident free project. 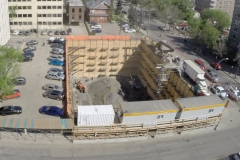 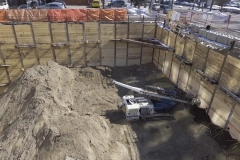 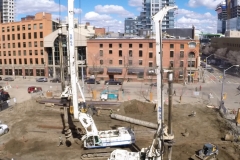