Keeyask Switching station consisted of 333ea HSS micropiles with a total length of 2610m and was completed in 58 days. The scope had increased an additional 731m from original estimated 1880m length.

The micropiles were installed with 44mm or 32mm anchor bar and HSS casing to open hole proportion of 71:29. The diameters of HSS micropile are 273mm and 219mm with a rock socket bond length up to 3.2m.

The DSD team was successful in extreme cold working conditions with a drilling production rate of 3.75m/hr even with an average depth increase of 40% and harder bedrock than initially planned.

DSD crews experienced challenges, including equipment disruptions due to the harder bedrock and the change in bedrock depth, DSD was able to troubleshoot equipment issues and minimize downtime by efficiently repairing equipment onsite and coordinating timely deliveries to the remote area

In the end, the micropiles were completed with zero incidents, on schedule, and on budget. 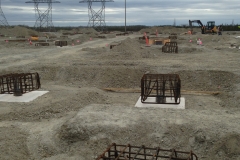 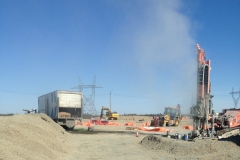