In early January, Doublestar Drilling (DSD) was awarded the supply and installation of a large secant pile wall for the Alberta Boot project being built by Axiom Builders. This particular wall contained 441 piles and had depths up to 10.5m and diameter of 880mm. The piling was completed ahead of schedule at the beginning of March. During the project, DSD had 3 drill rigs performing the piling scope: the Soilmec SR-75 and the two Liebherr rigs, the LB28 & LB24. DSD was the selected contractor due to their proven ability to execute in difficult soil conditions and meet a highly aggressive schedule.

The anchor scope of work began in early March, DSD’s 2 Davey Kent 725 drill rigs were used to drill the 79 tieback anchors in a matter of a few weeks. Due to the proximity of the CPR rail lines, significant testing and quality control measures were required in order to approve the excavation and encroachment agreements. A unique design build solution was able to minimize the number of encroaching anchors, which saved the owner significant costs. Together, the piling drill rigs and the anchor tieback drills high production rates steered DSD into a very successful project overall. 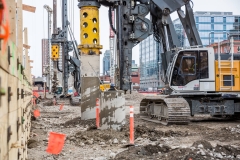 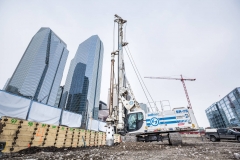 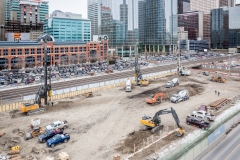 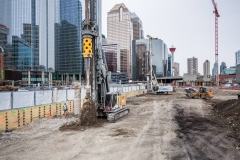