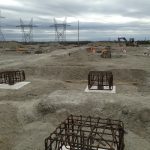 Keeyask Switching station consisted of 333ea HSS micropiles with a total length of 2610m and was completed in 58 days. The scope had increased an additional 731m from original estimated 1880m length. The micropiles were installed with 44mm or 32mm anchor bar and HSS casing to open hole proportion of 71:29. The diameters of HSS […] 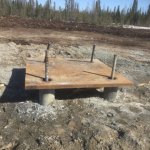 Doublestar Drilling (DSD) was awarded the main scope of work installing HSS Micropiles over 9 Tower Structures. After being awarded, the scope of work increased and an additional 16 HSS Micropiles were added to make the total drilled length of 1536m. Each tower was designed with 4 legs and each leg had 4 micropiles. In […] 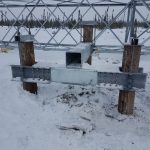 Doublestar Drilling was awarded the BiPole III project in early 2017, making it their first venture with Rokstad Power and Manitoba Hydro. They were accountable for supplying and installing micropiles and overburden ground anchors, related to the construction of the Section N1 of the BiPole III Transmission Line. In just under 2 months, a total […]