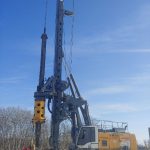 In November of 2018, Doublestar Drilling (DSD) was awarded the K3 to K1 Conveyor System Project by PCL Construction. DSD was accountable for the supply and installation of 115ea CIP Concrete Foundation Piles that would support the continuation of Mosaic Potash Mine expansion. Our scope of work included 915mm diameter CIP Piles on the CN […] 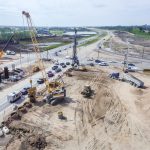 Doublestar Drilling was awarded the City of Saskatoon Interchange, Stone Columns Project by PCL Construction. These interchanges will help reduce the current high volume traffic in these areas. Several Alternatives were evaluated during project pursuit and the design team ultimately elected to proceed with the embankment stabilization through the use of compacted Stone Columns. First […] 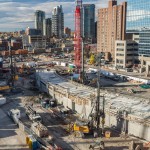 Doublestar Drilling was awarded the supply and installation of the Drilled CIP Piles scope of work for the New Central Library in Calgary, AB by Stuart Olson. The 100 piles ranged from 600m to 1500mm in diameter and to depths between 17m and 28m. Piles were fully cased using segmental casing to prevent soil loss […] 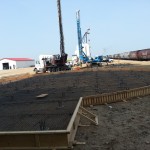 Patterson Grain 4 Bin Expansion – Assiniboia, SK DSD (Sask.) submitted a design/construct “value engineering” submission to PTC Construction Ltd. (Winnipeg) for 432 caissons. The design was based on a combination load sharing of caissons and raft foundation to carry the specified service loads for the additional 4 bins. All caissons were constructed to a […] 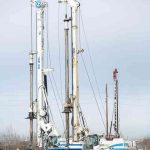 In early 2014, Doublestar Drilling was awarded by Dawson Wallace the new Home Depot Distribution Centre in Calgary, AB. With the site being 650,000 square feet, this is the largest piling project Doublestar has been awarded. After looking at the project details closely with the client, Doublestar proposed to conduct 2 load tests to provide […]